Residents of El Hierro have been put on standby for mandatory evacuation.

The Canary Islands are on watch for what scientists believe is a pending volcanic eruption.

The 108 square mile island of El Hierro is home to about 10,000 people. And the population is on standby orders for emergency evacuation. The island has seen thousands of small earthquakes in what seismologists refer to as an, “earthquake swarm.” They believe the earthquake swarm is a sign that an eruption is imminent. Nearly 9,000 tremors have been detected in the last two months.

On Monday a 3.8 quake was felt across the whole island.

Volcanologists cannot be certain that the volcano will erupt, but they believe it is likely. Of greatest concern are landslides that are being triggered by the near-constant earthquakes. At least 50 people have already been evacuated because of landslide risk.

Scientists are saying that a ball of magma is rising to the surface and causing the seismic activity that has so many worried. Volcanologist Juan Carlos Carrecedo said, “We don’t know if that ball of magma will break through the crust and cause an eruption.” However, he warned that an eruption could certainly occur within days to months.

At this time, the Spanish government has sent rescue personnel to be ready to assist in evacuations, if needed. And volcanologists raised the alert level to “yellow” on Sunday, which is the highest alert status the island has seen in a very long time.

A volcanic eruption might not be all bad news for the tiny island. Some predict that the pending eruption could attract tourists who are interested in such things. Eumenio Ancochea, a volcanologist from Madrid’s Complutense University told reporters, “An eruption could fill the island with people interested in these phenomenon. It’s normal that people are scared but there is no danger. After an eruption the lava advances at a few meters per hour and you can easily take photographs as it descends.”

The Canary Islands, much like Hawaii, are situated atop a hot spot in the Earth’s crust through which magma boils to the surface. Both the Hawi’ian and Canary Island chains were formed in this way. Hawai’i is still growing, and it appears that the Canary Islands are too.

Researchers are also noting that the island of El Hierro is not the well-known island of La Palma, which may be bisected by a previously undetected fault. Researchers have long warned that an eruption on La Palma could cause the island to split further in two (there is already a crack that bisects the island) and slide into the ocean. 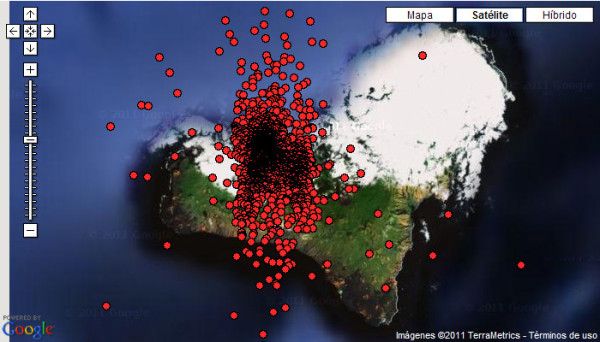 This would cause a mega-tsunami that would virtually destroy every coastal city on the on the east coasts of North and South America as well as potentially wiping out cities in Western Europe and the Caribbean Islands.

One can argue, and still argue even further just for the sake of arguing, but it is undeniable, at this point in time, that the Cabal is hemorrhaging and cannot get its acts together, i.e. doesn’t have enough financial muscle to do so, All…