Forget Kenya. Never mind the secret madrassas. The sinister, shocking truth about Barack Obama’s past lies not in east Africa, but in outer space. As a young man in the early 1980s, Obama was part of a secret CIA project to explore Mars. The future president teleported there, along with the future head of Darpa. 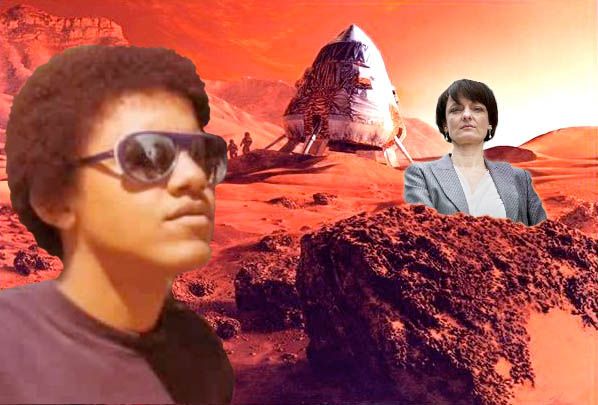 That’s the assertion, at least, of a pair of self-proclaimed time-traveling, universe-exploring government agents. Andrew D. Basiago and William Stillings insist that they once served as “chrononauts” at Darpa’s behest, traversing the boundaries of time and space. They swear: A youthful Barack Obama was one of them.

Perhaps this all sounds fantastical, absurd, and more than a little nuts. We couldn’t agree more. That’s one of the reasons we love conspiracy theories — the more awesomely insane, the better. Each week during 2012, when the Mayans tell us to expect the apocalypse, Danger Room will peel back a new layer of crazy to expose those oh-so-cleverly hidden machinations powering this doomed plane of existence. Welcome — back — to Tinfoil Tuesday.

According to Basiago and Stillings, Obama isn’t just lying about his identity. He’s lying about his military service record, too. While his political opponents in 2008 attacked him for never serving, in truth, he was concealing his participation in a hidden CIA intergalactic program hosted at a California community college in 1980.

Officially, the White House says Obama never went to Mars. “Only if you count watching Marvin the Martian,” Tommy Vietor, the spokesman for the National Security Council, tells Danger Room. But that’s exactly what a secret chrononaut wants you to believe.

Obama wasn’t the only one making the otherworldly voyage. As “Barry Soetero,” the 19-year-old Obama was one of 10 youths selected to secretly teleport to and from Mars, forming a band of interplanetary Teen Titans. Regina Dugan, the director of Darpa, was another member.

Between 1981 and 1983, Obama is supposed to have visited Mars twice, by way of a teleportation chamber called a “jump room.” Basiago, a fellow chrononaut, told the website Exopolitics that he saw Obama “walk back to the jump room from across the Martian terrain.” To acknowledge his comrade, Obama is said to have told Basiago, “We’re here” — apparently, “with some sense of fatalism.”

It is not known what exactly Obama did on Mars. (Socializing Martian health care, perhaps? Building a birth-certificate printing press?) His mission was a perilous one, according to Basiago and Stillings. The CIA wished to “establish a defense regime protecting the Earth from threats from space” as well as a legal claim to “territorial sovereignty,” making Obama something of a Martian conquistador. Presumably, Obama’s CIA handlers needed him to “acclimate Martian humanoids and animals to their presence” in order to secure the U.S.-Martian alliance. (We’ll bet you weren’t even aware of Martian animals.)

“Simply put, your task is to be seen and not eaten,” an elder chrononaut, retired Army Maj. Ed Dames, is alleged to have told a young Obama.

You can scoff at the idea of Obama on Mars. But it explains a lot. Obviously the birth-certificate controversy is a side effect of Obama forgetting to sufficiently establish his fake identity as he learned to manipulate time and space. (Dugan has a demonstrated record of supporting space travel; the “jump room” must be broken.) And who else but a man accustomed to keeping the country’s most explosive secret would be comfortable waging so many undeclared wars? Ignore Basiago and Stillings at your own peril. If Obama’s reelected, the U.S. is finally colonizing Mars.
Spencer Ackerman

How CIA helped Dalai Lama to end up in exile

It is widely believed that the Dalai Lama fled Tibet once Chinese troops gained control over the region. Actually, these two events have nine years between them. Tibet’s self-proclaimed independence in 1913, after the fall of Qing Empire…