Imagine a pot filled with cold water. A frog is quietly swimming in it. The fire is lit under that pot. Water starts warming up. Soon it becomes lukewarm. The frog finds this rather pleasant and keeps swimming. The temperature keeps rising. Water is now warm. It’s a little more than what the frog enjoys ; it becomes a bit tired, but it doesn’t panic. Water is now really warm. The frog finds that unpleasant, but it has also become weak, by now, so the frog stands the heat as it can and does nothing. The temperature will thus keep rising up to the moment the frog will simply end up being cooked and die, without ever extracting itself from the pot. 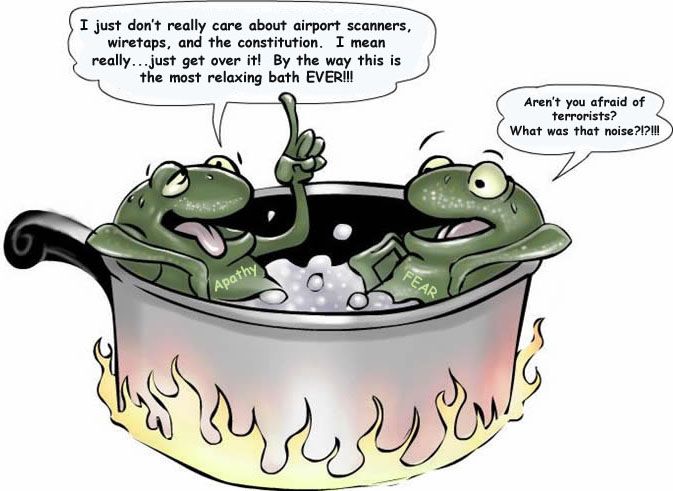 Plunged in a pot half-way through boiling temperature, the frog would immediately give a powerful and salutary push with its legs and find itself out of it.

This experience (which I do not recommend) is rich in teaching. It shows that when a negative change occurs in a slow enough manner, it goes unnoticed by our consciousness and, most of the time, will not trigger any reaction, opposition or revolt.

This is exactly what is happening in the society we live in.

Year after year, we observe a constant degradation of values which occurs – however – slow enough for nobody (or almost) to be offended by it. Nevertheless, as the frog suddenly plunged in very warm water, if we’d take any average person from the 80s and, for instance, ask her to watch nowadays television or to read today’s newspapers, we would see her react with utmost stupefaction and incredulity. She would hardly believe that anyone might one day write articles that mediocre in content and that irrespectful in style, as those we find normal to read today, or that some day might be seen on TV the kind of debilitating shows we are now offered on a daily basis. The increase in vulgarity and crudeness, the vanishing of points of reference and morality, the relativisation of ethics have all happened in such a manner – slow motion – that very few have noticed or denounced it.

In the same way, if we could suddenly find ourselves in the year 2022 and observe what the world will have become since then, if it keeps rolling down the slope on which it happens to be now, we would probably be even more disconcerted, so much does this phenomena accelerate (an acceleration made possible by the speed at which we are bombarded with new information, forgetting all the rest). Let us note, along these lines, that almost all futurist movies agree to present us a future that is certainly “hyper-technically developed ” but surely lugubrious.

Each time a change is too weak or too slow, we need either an acute awareness or a good memory to become conscious of it. It seems that both these faculties have become rare nowadays.

Without awareness (consciousness), we become less than human.
Without memory, we could go each day from daylight to night (and back) without even noticing it, because changes in light intensity are too slow to be detected by the human eye. It is our memory that makes us aware a posteriori of the alternation of day and night.
Over-fed by too much useless information, memory lessens.

Deadened by to much sensory stimulations, consciousness falls asleep.
Thus, our civilisation sinks into a spiritual obscurity signed by social and environmental degradation, Faustian drifting of genetics and biotechnologies, and mass “moronisation ” – among other symptoms.
The principle of the frog in the pot of boiling water is a trap one is never too cautious about, if one’s ideal is quality and improvement, if we refuse mediocrity, status quo and carelessness.

Interestingly, the same principle also works in a positive way, and even there it can play tricks on us. The daily efforts we make do also trigger changes – positive ones, here – but often too weak to be immediately noticed ; the improvements are indeed there, but for lack of noticing them, some people get wrongly discouraged.

So : how can we avoid the trap of the principle of the frog in the pot of water, individually or collectively ?

The principle of equal direction in eternal life When actions are carried out in the conditions of eternal life, it is necessary to consider the infinity of amounts of information with which you interact. Human consciousness, which largely…