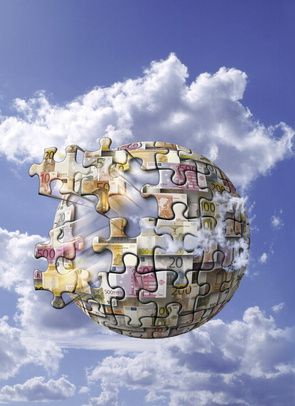 The problems with money stem entirely from how conventional money is normally issued – it is created by central banks in limited supply. There are three things we know about this money. We know what it does – it comes and it goes. We know what it is – it’s scarce and hard to get. And we know where it’s from – it’s from “them “, not us.

These three characteristics, common to all national currencies, determine that we constantly have to compete for a share of the limited amount of the “stuff” that makes the world go round. This money can go anywhere, and so it inevitably does, leaving the community deprived of its means of exchange.

It is simply the nature of conventional money that by its coming and going it creates conditions of competition and scarcity, within and between communities.

So we have to scramble for money to survive, we are forced to compete for it, often ruthlessly. Intent on getting the most for the least, we strive for the best bargains, as individuals, businesses, non-profits, governments, and nations.

As a society, as a generation, it seems we are determined to have everything ourselves no matter what consequences our excesses and negligence bring for others, now and in the future.

We rely on this money. It seems there isn’t much choice, despite its evident failings. Some people have little or none and cannot do what they need to live in this world – some people have vast amounts of it and yet it seems to do them, and the world, no good.

And what’s it all about? A money that is scarce, runs away in all directions, and comes from “them”. This money of theirs comes with many problems.

* the problem of supply – how much money in circulation is “right” for the economy? Nobody seems to know how to keep he balance between too much and too little.
* the problem of distribution – where is it? who has it and who hasn’t? is it where it’s needed? clearly not.
* the problems of cost – costs of creation and security, operations and accounting, the costs of interest, the costs of the courts.

But above all, at a cost beyond counting, our monetarily driven behaviour has utterly disastrous effects on our society and the global environment.

That’s the bad news, but you probably knew it already. Now here’s the good news – all these problems can be fixed with money that’s better designed.

Money is just information, a way we measure what we trade, nothing of value in itself. And we can make it ourselves, to work as a complement to conventional money. Just a matter of design.

Open moneys are virtual, personal and free. Any community, network, business can create their own free money – “free” as in free speech, free radical, freely available – but NOT free as in free lunch, or free ride. It’s not something you get for nothing.

Open money is money that must be earned to be respected. When you issue it, you are obliged to redeem it – your money is your word. It’s just a matter of your reputation in your community.

Open money is flat money. It confers no power of one over another, only one with another. Exploitation is no problem; when you have your own money, you can’t be bought and sold so easily. You can choose what you do to earn your money. And there’s no monopoly, all systems coexist in the same space. Flatter than flat – open money is superflat.

Open money is virtual and not limited. Physical things exist in space and time – which makes them limited – in number, mass, place. Virtual things don’t exist and need not respect any such limits.

So any and all things are possible in open money space – any form at all. It’s just a matter of devising a scoring system for those who consent to using it – money is simply a social arrangement.

Of course, a system won’t work as a money unless it’s well designed. A scoring system that nobody wants to use isn’t a working money. So while there’s no limit to the moneys that can be conceived, not all moneys will work.

The new money that will work will be created by us, in sufficient supply to meet our needs, and in an open context so that all can contribute and be acknowledged. Open money will circulate within the networks and communities it serves, quite legally and virtually free, by design.

We believe that the problems that come from conventional money can be resolved with open money systems.

– where conventional money is scarce and expensive, the new money is sufficient and free.

– where conventional money is created by central banks, new money is issued by us, as promises to redeem – our money is our word.

– and where conventional money flows erratically in and out of our communities, creating dependencies that are harmful to the economy, society and nature, the new complementary money re-circulates, enabling business and trade.

So let’s fix the money problem and for the rest of the problems that we face in our world, let’s see what follows.

– imagine having enough money, sufficient to meet all our needs.

– imagine a society and economy operating without any of the familiar monetary problems of poverty, exploitation, homelessness, unemployment, fear and stress.

– imagine a world where everyone can have work and pay, work and play.

– imagine clean air, water, and food – enough for all.

– imagine human society living in balance with the environment.

Too good to be true? Or maybe not? Maybe worth checking out?

These are our beliefs about open money, our ideas for developing open money systems, and our intent to act now to implement our beliefs…we invite you to sign on.

It isn’t a mission statement for anybody or any body. The statements aren’t owned by anyone or anything or intended to serve the interests of any individuals or organizations.

The purpose of the open money manifesto is self determined – it is inherent in its content.

* it isn’t negotiated, nobody votes on it.
* it’s not a matter of opinion, nor a political proposal.
* its validity is based on the sense it makes in and of itself.

The concepts of open money aren’t owned by anyone.

The manifesto is an open set of ideas – the concepts are there for extension, development, refinement – we invite you to sign in.

The manifesto is an active document –

The Open Web-Conference on May 21, 2016 – EDUCATION FOR ETERNAL LIFE