Is the official revelation of the reality of UFOs committed? The recognition by the Pentagon of a well-funded research program shows that the subject is taken very seriously in high places … One more step is taken towards disclosure. 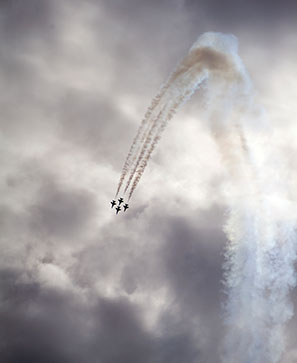 The information should have had the effect of a bomb, but the “treatment” of the news being what it is, it has largely gone unnoticed. A survey of the very serious New York Times, led by our colleague Leslie Kean, revealed last December that the Pentagon had conducted a research program on the NAPs (unidentified aerospace phenomena) from 2007 to 2012, funded up to 22 millions of dollars. Under the Advanced Aerospace Threat Identification Program (AATIP), a large number of civilian and military pilots have been recorded, as well as observations by air traffic controllers and others. aviation professionals radar signatures. The folder also contains several videos, one of which has been declassified. It presents infrared images taken in 2004 from an F / A-18 Hornet fighter with a wide oblong object like a Boeing 737, and whose maneuvers far exceed all the capabilities of known land-based aircraft …

According to investigators Leslie Kean and Ralph Blumenthal, the program continued after 2012, but it was simply terminated by Congress. It was indeed initiated by Nevada Democratic Senator Harry Reid, who said he was “proud” to have been at the origin. The existence of the program was also confirmed by a spokesman of the Pentagon and especially by the one who directed it during all this period: Luis Elizondo. This senior intelligence officer confirmed that he had a successor at the head of the program and that he had continued to collaborate on this topic with Navy and CIA officials until his resigned in October 2017, regretting a culture of “excessive” secrecy and “internal oppositions”.

Resuming only part of his freedom of speech, Mr. Elizondo has since intervened in several major media outlets, including CNN, CBS, Fox, etc., to confirm what he wrote in his letter of resignation. Numerous Navy and other reports report unknown air systems that interfere with military weapons platforms and demonstrate capabilities beyond what the next generation of aircraft would be capable of. It is vital to determine the capabilities and intentions of these phenomena for the benefit of the armed forces and the nation. When he made contact with Leslie Kean, known for his bestseller on UFO (1), they met at a hotel in Washington, where Mr. Elizondo sat “back against the wall “and” keeping an eye on the door “.

Another key figure on this file is billionaire Robert Bigelow, founder of Bigelow Aerospace, to whom a large portion of the program’s funding has been allocated. The latter, a friend of Senator Harry Reid, revealed that he was approached in 2007 by a Defense Intelligence Agency (DIA) official who wanted to visit the Utah ranch where he is conducting research on UFOs. Funds from the AATIP program have been used to secure certain buildings on the Las Vegas site that contain … artifacts! By this we mean objects or pieces of metal (alloys) that come from UFO observation sites or even crash zones (see also box). Robert Bigelow said in several mainstream media that he was “absolutely convinced” that aliens exist and that UFOs have visited the Earth multiple times. Senator Reid’s interest in the subject came from Robert Bigelow and since he is now retired from the Senate, Reid did not hesitate to say in an interview that the United States now had of “scientific evidence” of the existence of UFOs. For the few skeptical voices that arose from these revelations, the argument was limited to the classic: these “flying objects” are “unidentified”, therefore it is impossible to say that it is a question of extraterrestrial craft. This is, of course, and all the protagonists do not take such an affirmation.

If, however, we apply the principle of “Occam’s razor”, that is to say, economy of hypotheses, it turns out that the extraterrestrial hypothesis can easily be written at the top of the table. As the experienced observers point out, the maneuverability of the phenomena observed demonstrates, on the one hand, an “intentionality”, excluding any natural phenomenon of a meteorological or other type and, on the other hand, displacements and speeds, which in turn exclude the hypothesis of secret machines, Russian or Chinese prototypes, these remaining the obsession of the American defense.

But the apparent possibility of also controlling energy / matter and dimension / information parameters makes the phenomenon more complex than one might think, by favoring the “sheet metal and bolts” track, that of interstellar vessels piloted by human beings. from elsewhere. This is why we must be careful not to speculate on the origin of the phenomenon – without having at least bothered to look into the different lines of thought in this area – and to stick to the aspect, precisely, phenomenological . In this regard, the testimony of Commander (Lieutenant-Colonel) David Fravor is edifying. In November 2004, this veteran Navy pilot, with thousands of flying hours, was on a routine mission with Jim Slaight aboard an F / A-18 Hornet fighter. Accompanied by a second aircraft, they were located off San Diego, above the Pacific Ocean. (…)

Mayan Secrets to Be Revealed by Mexican Government

The Mexican government is releasing state-held secrets about the end of the Mayan calendar to the makers of a documentary, “Revelations of the Mayans 2012 and Beyond,” TheWrap has learned. The information — protected for 80 years — is…

According to Professor Reinaldo Rios “the document belongs to the special agent Guy Hottel with offices in Washington, reveals sending a memo to the director of the office in March 1950. “An Air Force investigator said that three of the…