To avoid opposition Canada secretly approved ‘Codex Alimentarius’ behind closed doors. The Federal Government, Health Canada, medical establishment and national media have worked together to deliberately keep the entire Canadian population (over 30 million people) in the dark. For this reason, the majority of Canadians have no idea that from this year (2010) forward, we no longer have the freedom-to-choose natural health products or have the right-to-decide what we wish to eat, drink or medicate – in order to manage our health. Therefore, thousands of beneficial natural foods, proven safe & effective for centuries and still commonly used today (to combat serious illness or to maintain overall health) are being banned or their potency drastically reduced, making them virtually ineffective. Whilst ancient cultural traditions (such as African, Chinese, Indian, ‘Ayurvedic’ and other indigenous practices), also developed and used successfully for centuries will be lost forever. It became law in Canada on Jan 1st / 2010. The Canadian government decided to hold off on starting enforcing these new laws until the beginning on 2011. 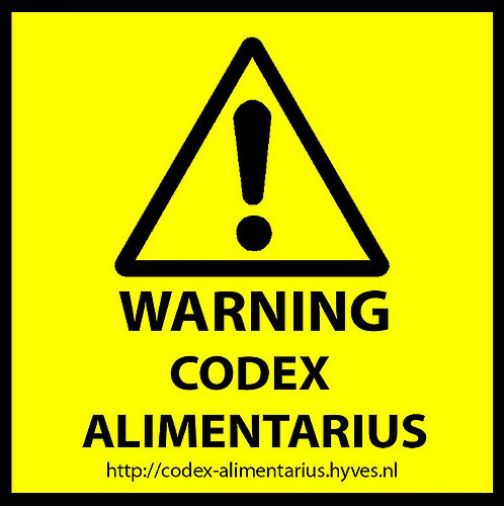 This program threatens to destroy your health, rights & freedom of choice; therefore, you will no longer have access to thousands of ‘safe’ natural products & foods. Natural foods, herbs, vitamins, minerals, supplements & indigenous remedies could be banned in 2011. This not only poses the greatest threat imaginable to our health, (including our children & future generations), animal welfare and the environment – but also the survival of many cultural foods, holistic practices, therapists and small health businesses. Centuries of ancient wisdom and spiritual beliefs will be written out of the history books and lost forever.

Codex Alimentarius means “Food Code.” This world food code is a United Nations agency, jointly sponsored by the World Health Organization (WHO) and the Food and Agriculture Organization (FAO). It has existed for nearly 50 years and its International Statute gives it a joint mission: protecting food safety and promoting world food trade. It is supposed to do so by adopting voluntary Guidelines and Standards (defining foods in international trade) and its decisions are enforced through the World Trade Organization (WTO) which considers its guidelines and standards as presumptive evidence in WTO trade disputes. Created to set global food standards to assist in trade, it is aiming to hand over control of natural foods and supplements to the pharmaceutical industries.

This has become a prime mover to Big Government, Big Agriculture, Big Pharmacology, and of course Big Greed.

The chairman of one of Codex’s committees stated recently that nutrients play NO role in health and should be considered TOXINS. They must be regulated, and sold in small doses which will have NO EFFECT ON THE BODY.

This is a total reversal of the mindset of the past. Nutrients play no role in health and must be handled as a toxin. This is just plain stupidity. No one has ever died from a nutrient or vitamin overdose. The powers-that-be that dreamed up all this insanity must really think the average citizen has a sub 80 IQ.

This impacts all of us. The damage to people and the environment will be catastrophic and irreversible. The fear is that organic / natural foods & health products will gradually be eradicated and in its place, genetically modified irradiated, cloned and other artificial foods will be promoted as the cheaper, healthier option, to prevent global starvation. This clever ‘spin’ was deliberately created to instil fear, so the public would not object to these plans. It is well known in the health arena that GM, irradiated & artificial foods are “dead foods” and a major cause of chronic poor health, malnutrition, mental illness and infertility.

Here is a quick list of some of the major talking points:

1. Consumer Protection? Unfortunately Not
The first step to understanding Codex Alimentarius is to realize that it has absolutely nothing to do with “consumer protection”. That’s propaganda for the sake of getting people and Parliament to yield to its implementation.

2. Says Who?
Rima E. Laibow, M.D. is a successful natural medicine physician who graduated from Albert Einstein College of Medicine in 1970. Dr. Laibow has studied more than 16,000 pages of Codex Alimentarius documentation. Her conclusion? Codex Alimentarius is a very serious threat to health freedom. We must take it seriously.

3. Meaning of Name and History of Organization
“Codex Alimentarius” means “food rules” in Latin. The organization was born in 1962 when the UN established the Codex Alimentarius Commission (CAC) as a “Trade Commission”. It was created to regulate, and thus control, every aspect of how food and nutritional supplements are produced and sold to the consumer. It is solely about trade and the profits of multi-national corporations.

5. Codex Alimentarius is Unscientific
Codex is unscientific because it classifies nutrients as toxins and uses “Risk Assessment” to set ultra low so-called “safe upper limits” for them. Risk Assessment is a branch of Toxicology, the science for assessing toxins. The proper science for assessing nutrients is Biochemistry. Codex does not use Biochemistry.

7. Shrewdly, Slowly Raising Heat
Codex will go into effect on January 1st, 2010, unless we, the People, take action and avert it. Right now, we are like a frog boiled slowly, the heat raised gradually so we won’t jump out of the water. The media is used to make us believe that Codex is about “consumer protection”. Part of the media strategy is to tarnish the image of natural health options, through for-hire studies.

8. Beware Codex Wolves in Sheep’s Clothing
One-time defenders of supplements and nutritional products, such as the National Nutritional Foods Association (NNFA) and Council for Responsible Nutrition (CRN), have fallen prey to new pharmaceutical members and are spreading disinformation saying that Codex is “consumer protection”. Their boards used to be run by health freedom fighters.

9. VMG: Banning Our Supplements
Codex is made up of many standards for every aspect of food. One of these standards was ratified (approved) in July 2005: the destructive Codex Alimentarius Vitamin and Mineral Guideline (VMG). The VMG can ban all high potency and clinically effective vitamins & minerals. For example, Vitamin C would be restricted to only a few milligrams per dose. Other nutrients, such as amino acids, are also under threat.

10. DSHEA, Our Best Legal Defense
The U.S. / Canada has a powerful legal tool for health freedom: the Dietary Supplement Health and Education Act (DSHEA), passed in 1994 after massive grass-roots action. DSHEA scientifically classifies nutritional supplements as food and prevents dosage restrictions; Codex unscientifically classifies them as toxins and sets ultra-low doses. The VMG violates U.S. law because it violates DSHEA. We must unite to protect DSHEA, our best legal defense against Codex.

11. Congressional Effort Underway to Undermine DSHEA
The pharmaceutical industry works through irresponsible/corrupt politicians to do their bidding. The path to institute Codex in the Americas is to “influence” Congress to pass laws friendly to drugs and unfriendly to nutritional supplements, so that slowly everyone comes to believe that nutrients are “dangerous”, and drugs are “proper medicine”. Susan Davis (D, CA) and other politicians are helping Big Pharma by supporting bills designed to destroy DSHEA.

12. Governments Illegally Supports Codex
The U.S. / Canada Codex Offices are unfortunately highly supportive of Codex. So is the rest of the government, including the pharmaceutical-friendly FDA. They should not be. DSHEA and other law means their support is in direct violation of the laws of the U.S.A. / Canada! They are breaking our laws and they know it.

13. Let’s Enter Coordinal Relationships With Congress
Government has the power to keep us Codex-free. It can defeat bills designed to destroy DSHEA, support health freedom bills, and reprimand the Codex Offices and the FDA. Using the Internet we can reach Congress directly to create a lobby of the people, for the people. Families of Congress would suffer too, if Codex is not averted.

14. Call to Action
Thanks to the Internet, millions of health conscious citizens can unite to protect health freedom from Codex Alimentarius. We have the power to turn Codex into a blessing if all of us in the natural health community use it to get active, get organized, and stand up for health freedom. Together, we will let Big Pharma know that we see through their deception and will protect our access to natural health care.

This is just another extremely blatant example of the global push into this so called “New World Order”. One world government to dominate and control every aspect of our lives. Codex Alimentarius is just another way for the government and corporations (not that there is a difference anymore) to take away our rights and freedoms. When you connect the dots you will uncover a disturbing plan to create an increasingly ‘SICK’ society, solely dependent on artificial foods, prescription medication & legalized drugs, whilst vigorously destroying the environment. In other words, the creation of wealth through fear, planetary deception, and immeasurable human suffering.

Steven King has never written a novel that has solicited so much horror through it’s complexities, brutality, and eventual body count then Codex Alimentarius and the massive destructive potential it wields. What appears on the surface to be a benign consumer health protection legislation turns out to be legalized health services murder/suicide.

For additional information here is a list of informative documentaries :

New Moment New Ideas Company TV commercial for the Government of the Republic of Macedonia, Ministry of Education and Science. Social campaign (series of commercials) aimed at promoting education. Did God create everything that exists?…